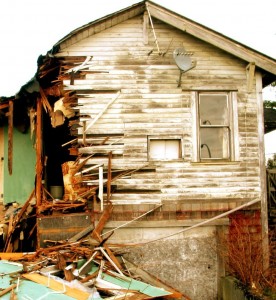 Recently, I watched a rerun of The West Wing that showed the president right after his daughter had been kidnapped and safely returned. Shaken by the uncertainty of life, the President faces a number of ambiguous challenges, balancing complex relationships between a number of nations. In the midst of this, a series of tornadoes strikes the midwest and he travels out to provide support. When he gets there, he starts out simply trying to encourage those there but slowly finds that he is enjoying talking to the individuals and listening to their plight. Later, he offers to help out with the dishes and try to work on the reconstruction. There is nothing like the temptation working on things with immediate results.

Any leader can relate to this temptation — the desire to seek out something that is easily measurable, where you can see the work of your hands. As you become more senior in a company, the more abstract the position becomes – defining culture, setting vision, cultivating relationships. This is what defines leadership — initiating, creating, directing action in the midst of uncertainty. But this can be incredibly draining, especially during difficult times.

At one point in my career I made the transition from being a manager to being an individual contributor. I looked forward to a bit of a reprieve having someone else define the problem that I needed to solve rather than having to figure it out on my own. My boss though didn’t do this. At one point I pulled him aside and said, I deal more with your boss than I do with you. He turned to me and said, Matthew, you’re a senior engineer, you should define the problems that must be fixed. You should work with my boss and other leaders in the organization to solve the bigger problems. Alas, it’s much easier when someone else is defining the objectives. But that is what it means to lead.

Several CEOs that I know struggle with this. They are very competent people at whose hand comes prosperity and success. They are capable to handle both large and small problems, but they are so tempted to grab for the concrete tasks at hand rather than figuring out how they can spend more time facing the abstraction. It’s totally scary to be out doing and executing outside of what we know. Faced with a million options, choosing the path means the possibility of failing. But this is exactly what’s needed.

The West Wing President finally has his press secretary turn to him and challenge him about what in the world they are doing out there. Reiterating that the world needs him to be working on the big issues, not washing dishes. We as leaders are called to that war, beware the seduction of the simple concrete tasks.