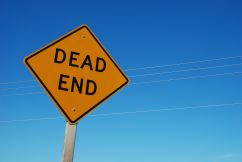 Often, as a leader, you can see the long term consequences of a culture if it continues unabated.  You see people taking habitual actions that lead to horrible ends and you want to encourage them to change, but changing a culture is never as simple as you’d like it to be.

.  The plot concept is probably familiar to all, a deadly virus knocks out 99.999% of all humans in two weeks time.  The few who remain are forced to start over using whatever skills they have. In this case, the narrator is the only one in his tribe who has a college degree.  As a result, he is the de facto  leader of the tribe. The book  covers three different phases of time in his life: the initial outbreak and forming the core of the tribe,  the problems of the early tribe (after 20 years), and then 40 years after that, when he is about to die.

While I found a good portion of the book a bit contrived, one of the more subtle themes is the nature of cultural and societal norms. As such, this book encourages an interesting thought experiment about societies, both large and small. The narrator, as the lone educated man, desires the return of the old culture and the old productivity. He remembers what America was like and wants to instill the same values, often using diatribes to try to motivate change.  He wrestles with helping them understand the challenges that lie ahead, but right now they are surrounded by plenty (i.e. shops full of goods).  He wants them to innovate rather than scavenge — to provide for themselves rather than taking the ease of simple consumption.

Ultimately, he changes his tack.  He stops forcing school and stops giving speeches. He “invents” a bow and arrow from a tree, built by his own hand, as a game, so that when the bullets no longer fire, they will still be able to hunt. In the end, working with the culture to improve some aspects of it.

It is very difficult to change any culture.  Each culture is comprised of self-reinforcing cycles. We look to others for assurance in our actions and they look to us for confidence in theirs.  If you start pushing for change too hard, they stop looking to you for validation. You simply become an outlier.  Don’t push enough, and nothing changes. Changing is more work than staying in the rut of the status quo.

However, the size of the group can make a dramatic difference in it’s cultural fungibility. For instance, when the group is small and the connections between them weak (like a new startup) the culture is highly influenced by the founders. The culture takes shape and continues to evolve as new employees join them.   Each new employee affects the culture some, but their influence tends to be completely subsumed by the others influence on them.

Relatedly, as I mentioned earlier (“Inertia of Uncertainty”), as time passes, we, as leaders, stop noticing the things that we wish were different. As a result, when you come into an organization new, and wish to change things, you must over-communicate what you want to change and hold the line with solidarity.  There is a limit to the amount of change that will be accepted, so you must pick the right battle and persist.  No single speech will evoke change. The change has to be encouraged at every opportunity and violations of the change called out.  This takes longer than you think it should take, but as with the narrator in Earth Abides, once it’s done, the changes persist long after your gone.

One thought on “Cultural Inertia”