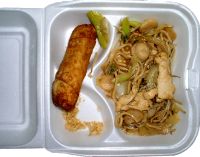 Ever opened a tupperware in the refrigerator and wondered if something was still good. Then decide you weren’t sure you wanted to eat it now, and put it back in case you decide different later. This process gets repeated several times until nature in the form of green fuzz makes the final decision for you.

The same is true with the current state of government spending. For decades, we look at the debt and consider tackling it only to decide, we’ll figure it out later. When times are tough, our politicians want to pour money into shovel-ready projects, thereby putting money back into the economy. If on the other hand, we pay the debt down, we take money out of the economy. This effectively slows a boom period and what politician wants to mediate prosperity.

We got our answer when George W. Bush sent taxpayers cash back due to the US Treasury’s surplus of income earlier this decade. Just like the leftovers, we decided to wait for a “better time” to eat the debt. For this reason, I laugh when I hear about how we are leaving the debt to our children as though our children are suddenly going to take an action that we shied away from. It is true that we pass the burden of the clean up to them, but they likely won’t clean it up until the debt is covered in a green fuzz that jumps out and bites us.

And by then, do we think somehow our outcome will really be different than what occurred recently to the loss of confidence in large wall street banks?  Who is going to bail out the US Government?

One thought on “The Green Fuzz on Government Debt”