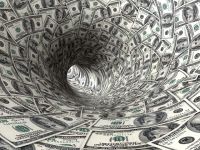 If you’ve followed the news regarding the government bailout of large corporations, you’ve probably heard of “Moral Hazard” — a term used to describe that when you mitigate the risk or take away the consequences of bad decisions, those who took the risks to begin with will take even more risks. This concept extends well beyond the bailouts to our everyday lives.  For example, the spoiled teenager whose parents always step in to take away the consequences of the teenager’s errors.  This causes the teen to act in increasingly more risky ways, knowing that the consequences will be covered.

This same concept applies to startups. Working for a startup requires risking a number of things for the possibility of a great success.  As such, this risk forces focus and drives the startup to find the right market and create a business.  Back in the golden years of internet startups, companies were being thrown 10’s of millions of dollars for simply having a good idea. This allowed the team to continue working on “product ideas that are cool” rather than figuring out how to make money.  They felt okay about “investing” way too much on the work environment (e.g. stories of branded china in the company cafeteria), but this significantly shortens their runway.  Effectively, it shortens it to the point that they really start taking action once they start feeling the heat of running out of capital.  They find a way to return to their “risk” threshold.

Essentially, if you put too much capital into a company that can not make use of it effectively, you create moral hazard for the startup.

However, the flip side must be avoided as well.  If you put too little capital, it changes the psyche of the people running the company.  There becomes too much focus on saving money and too much concern spent focusing on avoiding the crash rather than focusing on the right goal.  Succeeding in a startup requires risky decisions not significant risk aversion.  Along these lines,  A Venture Capitalist friend of mine once said that they teach pilots who are in trouble to stay focused on where to land (i.e. how to succeed), not to focus on avoiding the trees reaching out to grab them.  Focus on the trees and soon your plane will meet one. For a startup to succeed, they must remained focused on the business and how to make effective use of the capital they have toward that end.

Either gorging or starving  a company hurts both the investor and the company.