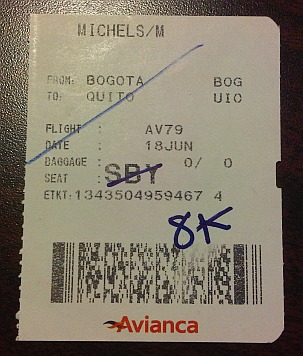 After arriving in Bogotá, we were flying back to Quito and I had a boarding pass with my seat number handwritten on the ticket. It appeared to say 8K and I thought, K?! — there is no such seat on a plane with only 6 seats across. But as an engineer, I have the ability to solve problems that might not even be there and so I thought, ah ha, it must be 8A. Then patting myself on the back for reading such clearly poor handwriting, I thought I don’t even need to check this with anyone and if they ask at the front of the plane, I’ll just tell them it’s seat 8A.

It felt really good until the stewardess asked to see my boarding pass and then said, “Oh, you’re in 8K!”. I looked across the seat and saw the sign with the seats on my side lettered 8ABC and on the other: 8DE K! So you would think that after considering the previous story, that I might be more apt to confirm my conclusions when venturing into something new, instead, I just ponied up some more pride and solved problems that weren’t even there.

Even reconsidering this story, it makes me think about how often still, I find myself getting excited about figuring something out and then not seeking to clarify whether the solution is correct (or even if there was a problem to begin with). I mean, how hard would it have been to at least glance at the seat numbering on the plane? How hard would it have been to just ask the stewardess. Is reading bad handwriting really such a skill that I can puff myself up about it?

Engineers often are able to make sense of things that others are confounded by and they extrapolate that ability outside of their own sphere of know how. When this happens, they are in for a lot of learning – whether it’s engineers assuming the know exactly what the customer needs or that they know better than that sales guy how to pitch this product. Again, the key is failing sooner rather than waiting for the judgment of reality.