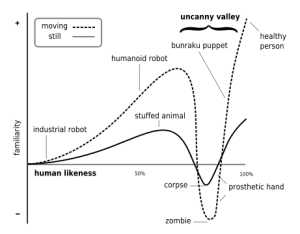 When trying create a 3-d computer-rendered human, we find that as we get increasingly more realistic, it only feels more real up to a point.  Suddenly it seems creepy and unreal before finally feeling truly real. Instead of recognizing the rendering as something which is alive, it seems just short of that and so we start seeing it as being dead. It’s one of the reasons many of the Pixar films show people as somewhat cartoonish.  It doesn’t give us an uncomfortable feeling when we see it. This effect is called the uncanny valley.

This same gap seems to exist in other areas.  As we approach excellence, we find that suddenly the little errors seem even more pronounced.   For example, when we first start learning a language we go from being able to only communicate with hand gestures to having a few words, each one leading to increased delight on the person listening as suddenly there is clarity instead of confusion.  Every added word communicates that much better.  At some point, we’re able to get most of the basic communication needs across and we start learning how to perfect verb tenses and use the right phrasing for the situation. Unfortunately, as we approach fluency, those listening suddenly are more disappointed by our mistakes than delighted that we know how to say anything at all.  It sounds close to being correct, but is incorrect in some ways that make people feel uncomfortable. We struggle with those final errors as it’s many small mistakes that we must eliminate.  Adding to the difficulty, we are even more critiqued as people point out the things that aren’t right.

It’s not just languages,  consider an artist whose art is almost great but something feels not quite right.  Or the dancer who is close but feels like they are keeping something in reserve.  We recognize when things feel right, but for some reason when things are just short, we feel disconcerted or perhaps disappointed.

Perhaps we can take solace that if we find ourselves in that gap, discouraged by the reactions of others and frustrated with ourselves, we can remember it’s only a phase and that all the greats had to pass through the same difficulty.