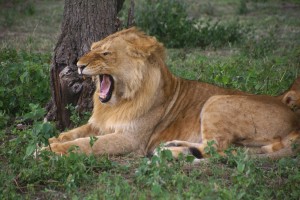 At one point, my family traveled to Africa to visit my sister who was working on a medical mission.  We decided to go on a safari as a family but the company only took cash.  The largest size bill they had in Kenya was not very large and as a result, my dad had to carry a very large stack in his neck pouch from the bank to the safari company.  As he was walking, his neck pouch exposed with cash hanging out, he said out loud: “I can’t believe I’m having to carry all this cash!” My mom responded, “Don’t say that so loud!”. Nevertheless, they made it safely to the safari business and paid the bill, and we’ve laughed about this story for many years since.

Are there criminals in Africa? Just as certainly as there are criminals in the US.  There is probably someone there who would have mugged my father had he been there when my dad was carrying his stash down the street.  But my dad’s vulnerability was not met with someone who wanted to take advantage of it.  There is a difference between being vulnerable to a crime and the crime actually occurring.

Our fears though tend to assume that if we are vulnerable, someone will take advantage of it. Ever woken up and wonder whether you locked the door and gotten up to check? Ever heard someone actually check whether your door is locked?  For most of us, it’s yes the the first one and no to the second. Few people wander around neighborhoods testing doors and then moving on if they are locked. While it’s probably a good idea to lock our door, leaving it unlocked for one night hardly changes anything. Apparently people in Canada never lock their doors. Yet  our fear tells us that our door is unlocked for just one night, we will wake up to someone sacking the house.

Bad things happen as a combination of being vulnerable to them AND someone or something taking advantage of them.  Being vulnerable doesn’t mean that a crime will be committed. This is useful for assessing how to make our lives safer as well as not fretting the minor vulnerabilities we find ourselves facing from time to time. It’s also a more general lesson about being vulnerable ourselves.