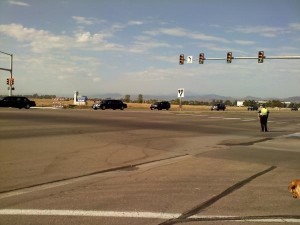 On my way to pick up a camera from a friend yesterday, I noticed the police had cordoned off all the streets going into the area where his office was.  You could pull in, but you were only going to be able to pull out by going through the parked police car. After picking up the camera, I tried to exit, and failed.  So I parked the car to get out and see what was going on.  Right as a neared one of the police officers on duty, I heard a few sirens, looked at the crowd of people who all had their cameras pointed down the street and saw several motorcycles followed by a couple limousines, some large black SUV’s and even an ambulance drive by – twas the Obama motorcade.

Our city was of course enamored at the prospect of seeing the sitting president.  It represents something bigger going on outside of our everyday lives. Yet all of us have the ability to impact the world with how we live our lives.

It’s easy for me to find my life filled with a litany of distractions.  Urgent things that demand my attention. We can easily settle into a life where we seek endless distraction rather than seeking to change something bigger than just ourselves. Without pushing against our nature, though, we find ourselves only paying attention to the little things changing in front of us.

Television producers know this weakness and abuse it. Next time you watch television, count how long the frame stays with a single camera shot before changing — often times its only a second or two. They do this to force our brains into reorientation mode — we focus intently on the change until we understand our new surroundings.  By continually changing the surroundings, it continues to distract us – keep us focused in on what they want us to focus on.  This is why we sometimes feel exhausted after watching TV.

Life can resemble the same thing, a constant fluttering of change that distract us into believing that it’s important. This is how life passes us by and how it’s often just as memorable as least weeks TV episode. Life is more than distractions.

One thought on “The Daily Distractions”