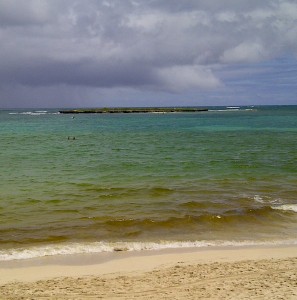 This afternoon, I started to swim to this island. It looked like a short swim away, I mean it seemed to only be sticking out of the sea by about one or two feet. After swimming for a while, I started to see people standing on the island who had kayaked there. Given their height, I realized that it was a lot further away than I thought. But I was already half way there, what to do…

I knew that I both wanted to get to the island to feel the immediate sense of accomplishment, but more, I wanted the memory of having made it out that far. It turns out the height of the island above the sea was closer to 4 or 5 feet. When I got there, I walked around the island which was mostly made of coral with bare feet (ouch), but again, I had swum all the way out there, I wanted to see the whole thing.

It was probably the highlight of my day, not because the experience itself was particularly enjoyable, but rather because the memory of it is very enjoyable. Daniel Kahneman described this difference between the enjoyment we get from experiencing something in the moment compared to the enjoyment we get from revisiting the memory of what we had done in his TED speech.* This difference is a helpful framework for thinking through life’s event

Consider all the memories you have of eating ice cream a couple of years ago. If you have any, they are probably not very clear. We eat ice cream because we enjoy it in the moment not the future memories we will have.  But we don’t only chose experiences we enjoy now, but also chose to “make memories” that we will enjoy in the future.

My swimming was exactly this type of experience. Swallowing sea water that kept splashing me in the face coupled with the constant reminder of not being a great swimmer and then walking on rough coral was not about the enjoyment of the moment – but it is a great memory.

* One of his examples is a colonoscopy study that shows people are more likely to come back for another scope if they leave the scope in longer – though I think they now totally sedate you so maybe they just decided not remembering it at all is better. His TED speech is a worthwhile watch. The ice cream example came from a great book on cognitive biases called You Are Not So Smart from the author of a blog by the same name.