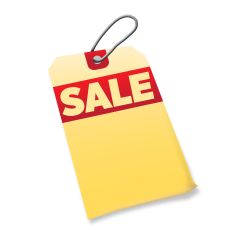 Think of the last 4 digits of your social security number. Now estimate how many doctors you think are in Manhattan. Obviously these two numbers are completely unrelated, but most people when presented with this problem will use their SSN as a starting point for estimating the number of doctors, and in studies, they’ve found that people answer these two questions with strongly correlated answers.

As I’ve stated before, we like to think of things in relative terms. It’s easier for us to compare than to try to assess things objectively. This cognitive bias is called anchoring and is a well-worn technique in business negotiations. The seller starts with a very large price and thereby anchors the rest of the conversation there (or the buyer starts with a very low price, it works both ways).

It’s also true that we look at two different prices and compare them by percent. Even if we are not good at math, the difference between $300 and $400 seems much larger than the difference between $15,250 and $15,350. Suppose that the first two numbers represent the price of a washer and the second two numbers the price of a car. Both are typically purchased with about the same frequency. This effect holds true even if we are extremely wealthy and $100 would make no difference to our economic life, we still care more about the $100 on the washer than we do on the car.

So even though it’s easy for us in business to step back and look at more objective measurements, all of the people involved are still thinking in relative terms including ourselves. Something to think about when the sales guy you’re talking to asks you to think of the last four digits in your social security number 🙂