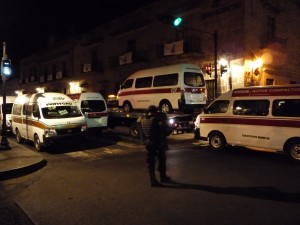 A riddle: What do the filibuster, the bus drivers of Morelia and hunger strikes have in common?

While strolling the streets in downtown Chicago, I considered the incredible buildings that took decades upon decades to create. Even in the last decade, things continue to change and evolve. The great Chicago fire wiped out much of what the city was almost 150 years ago, and the city rebuilt.  This is the Asymmetry of Order —  how quickly things can be destroyed that took so long to build.  There is another aspect of this though, which through the years has given minorities the ability to change the course of history.

To build a completely new system is difficult, yet stopping or thwarting the running of an existing system takes but a few dedicated people.

A year ago, Ann and I were visiting Morelia.  One evening, the streets in downtown were completely blocked off. The bus drivers (privately owned) decided that the government had issued too many taxi permits and was not cracking down sufficiently on those operating fake independent buses.  As a result, they organized themselves and in one hour filled the streets of downtown Morelia with buses all parked and locked.  Traffic through the city was effectively stopped and tow trucks worked through the night to clear them all away.  It carried a heavy cost as many of them had to pay to get their buses back from the impound lot, yet even tourists became aware of their plight.

So what does the filibuster, the bus drivers of Morelia and hunger strikes have in common?  They all leverage the asymmetry of order in order to bring attention to their cause. This is hard work because the system will recover, but what the minority is depending on is the humanity of those in power.  That people will take notice of the extremes that people will go to in order to make their point.

Yet this asymmetry is exactly what empowered non-violent protest for so long.

The quote above kicks off a song I enjoy by Linkin Park which is why it came to mind when thinking about this topic. Even though those who are not in power have a hard time building something completely different they are able to stimy the efforts of those who are in power.  They are able to do this because of the asymmetry of order.  A small effort can significantly distrupt a city.

This is the basis of the fillibuster, the cars in Morelia parked in protest of too many taxis, and even terrorists.  Hunger strikes though depend on the humanity of those in power.

[I was on vacation last week and I thought I published this last week.  Sorry for the delay]