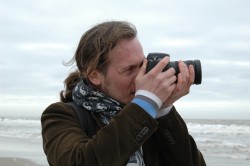 This weekend we attended a birthday party for my Spanish teacher here in Guadalajara. Her friends brought a simple point-and-shoot digital camera and were taking lots of pictures of everyone there. They themselves posed for many pictures.  I realized that the pictures I’ve seen from Mexican events are pretty much exclusively of the people that were there, and not of the location.  And the pictures aren’t just the generic “3-2-1 Cheese” poses, but pictures of people watching TV, or even sleeping. At one point, my teacher showed me pictures of a trip that she and her boyfriend had taken, and each picture was only of the two of them, with slightly different backgrounds.

Most American birthday parties have their fair share of people pictures too, but they’re very likely to contain many pictures without people too (of the cake, of the location, etc). The location of this birthday party was at very well decorated restaurant and I was picturing myself (and my American friends), taking artsy photos of the candles or of the beers on the table.  American family-vacation photos also have people pictures, but the vast majority are of the location they went to and what they saw.

I mentioned this difference to my teacher and her Swedish boyfriend. She said that her boyfriend’s pictures were also mostly of the location. While going through them, she would keep asking “Where are you?”.  Upon recalling this, she exclaimed: “They’re so boring!”

It made me wonder if what we take pictures of when we are on a trip reflects the relative importance that we place on those things.  It’s clear the Mexican culture is far more interconnected personally and that the people are what matter on a trip. For Americans, it seems more about the destination, but you may recall that I have a Mexican friend, who takes fantastic photos, both of people and things, so perhaps it’s just a male/female difference.

[Update: I met some friends for breakfast today (3/21): Two from Mexico, one from Italy and one from France. I posed this question to them: When a traditional family from your country goes on vacation, are the pictures mostly of the people or of the place? Both Mexicans agreed that family photos are pretty much entirely of the people.  The two from Europe stated it was more about the place.  My Mexican photographer friend who has a photo blog said that his family wouldn’t let him take pictures on vacation because they would end up with totally unusable pictures and when he shows pictures of trips to people, he has to excuse the “junk pictures” (pictures taken of the place without people). In response to this blog, one of my American photographer friend, tweeted his flickr account, which has some awesome pictures with a mix of people and place. I continue to find this cultural difference fascinating and thought I update this entry with the latest information.]