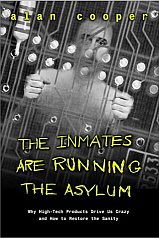 This week I got a rental car that had three buttons on the front of the dongle with the keys.  In most cases, it’s lock, unlock, and open trunk.  On this key chain, it was lock, unlock, and alarm.  Seriously, the alarm was front and center and exactly where you would normally expect another function. At least twice in three days, I hit the alarm button while thinking I was unlocking the trunk.  And there’s nothing that feels more foolish than drawing everyone’s attention as you scramble to turn the stupid thing off.

No one likes to feel stupid, and yet that’s exactly how so many computer interfaces make us feel. Making matters worse, computers are now integrated into almost every part of our lives – from our car remote to our kitchen appliances.

The Inmates Are Running the Asylum provides an excellent explanation and defense for why user experience design is needed in order to create a product that is actually desirable rather than simply being functional.  Most of the process employed by User Experience Designers is to develop a sense of empathy for the customer that can be shared within the entire company.  The result is a product that people love to use instead of put up with.  An iPod instead of a key dongle that makes lots of noise.

2 thoughts on “Book Worth Reading: The Inmates Are Running The Asylum”