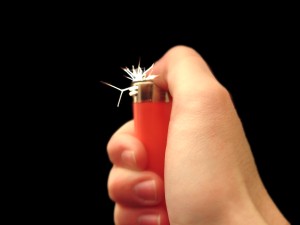 It may be that “Fear is the mind killer”, but doubt is the spark killer.

Earlier in my career, I had the opportunity to hire a number of great engineers and tried to help cultivate their careers. In the process, I found that one of the most difficult things to teach was initiative. Some were capable of seeing what wasn’t there and knowing how to fill the gap. They had the spark to initiate without asking, and moving the group closer to its goals. This is one of the most important skills that anyone can cultivate.

At the same time, it’s hard work.  After hiring the full team, I then had to lay them all off.  I went from being a manager back to being an individual contributor. Honestly, I was looking forward to taking a break from identifying and driving a number of projects to being told what projects to drill deep on. I noticed however that I was still raising issues and working more with my manager’s manager than directly with my manager. I asked him about whether I should be getting more direction from him.  He said, “Look, you’re a senior engineer. I fully expect you to be out there identifying and driving issues with all levels of management that you need in order to bring them to resolution”.  It was the kick in the pants I needed.

Much like a spark plug, it requires a lot of high-voltage energy to initiate.  It can be exhausting and because you see so many gaps, it can be difficult to know which one is most important and which will add the most value.  In fact, the ability to correctly identify the most valuable and most important is a key refinement of the skill of initiation.

I’ve seen some try to take initiative but were not able to filter which of the missing things was most important. Sometimes functionality is more important than aesthetics, other times it’s the opposite. Investing your time by initiating a project that is not important, ends up being a waste. Much like many of the inventors on the show “America’s Top Inventor”, unable to see that their invention was not important nor even necessarily relevant, in spite of spending their whole life refining it.  Unfortunately, there usually isn’t someone to guide you in whether something is important because you’re the only one that sees just how important the initiative is.

As a result, doubt and second guessing is common place.  I’ve seen many very intelligent and capable people not initiate because they worry about whether they will succeed.  They don’t feel like they know enough, or can learn fast enough, or can make good decisions. Or they don’t take their head far enough away from their own assignment to look around and see what is falling between the gaps because it’s harder to do that, than just staying nose down. So they pause, they hesitate, they wait for someone else to be the spark.

In the end, this is what prevents more initiative than anything else, doubt that you can.  Everyone has doubt, even the leader who appears incredibly confident.  But those who face their doubt, and initiate anyway, are the ones who move things forward.

While it’s certainly true that you can’t have everyone initiating in random directions, and as we saw earlier, sometimes initiating is choosing to follow someone else’s crazy idea, still, people with the spark is what both our world and our businesses need most: People who step out and take a risk because there is a gap that needs to be filled.