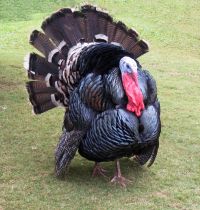 Since moving to Mexico, we’ve become accustomed to differences between our expectations and the culture.  Since Thanksgiving isn’t celebrated here, Thursday felt like any other day, and since my wife didn’t have class on Friday, we planned a celebration with her class of 13 (plus guests) from the University.  The plan was to meet at our house at 2pm and she recruited them to bring some of the various ingredients to the feast (mashed potatoes, rice, pumpkin pie, etc.)

At 2pm, a total of zero people had arrived.  This was to be expected.  At 2:20, noone.  2:40, still noone. At this point, we were beginning to wonder if anyone was going to show up (we had considered that several would likely not show up, but we didn’t expect they all wouldn’t show up).  The first guests arrived at 2:55pm, and by 3:40pm, most had shown up so we started the meal.

In addition, since we live in a small row home, we weren’t sure how we were going to find seats for that many people in our house.  We bought several extra folding chairs to make sure we would have enough places so that if everyone showed up, they would all have a place to sit.  Eventually, there were 17 guests (19 including us) and still there were empty seats (plus we hadn’t even gotten all of the seats the we had out). Whereas we Americans tend to like our space, our guests were more than willing to squeeze into small spaces.  I am still amazed that there were 8 people sitting at our 6 seat table, not because there weren’t other places to sit, but because sharing a seat was just fine by them.  Even from the get go, 4 people decided to sit on the stairs (even though there were plenty of other places to sit).

Like most experiments in life, we learned more about the culture and how it differs from our expectations. This process is very similar to most processes in life.  You plan based on the the best of our knowledge, you try things out and roll with the punches, and then learn more about yourself and the situation.  Too often in business or personal situations, we skip this final step, dismissing the things that didn’t go as expected as outliers, or not even reflecting on them to see how to improve.

Overall, it was a fun time and great to meet all of my wive’s classmates.  We were thankful to have so many friends come to our house and to enjoy celebrating Thanksgiving and I was thankful for the opportunity to learn more.

2 thoughts on “Thanksgiving in Mexico”