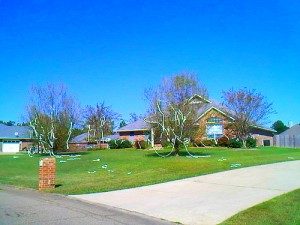 When I was a teenager, I started being able to challenge my father in games.  Often after making some particularly aggressive play against my dad, he would retort: “I don’t get mad; I just get even.”  This was something he said from time to time, sometimes when I was just being obnoxious to him.  Fortunately for me, he rarely if ever tried to avenge himself in those cases.  I have a hard time imaging him saying this now as I think we both learned to reject this adage.

All of us have had practical jokes played on us.  Some people’s first response is to start looking for a way to repay back the joke typically with greater intensity than the original.  They pay the person back, only to find themselves victim to an even bigger joke as the other person does the same.  This escalation stops being fun pretty quickly and can break relationships.

The problem with getting even is that there is no even.  We don’t esteem the impact of our jokes the same way others experience them.  Studies have shown, for example, that when we punch something and then get punched back with the same force, it feels like much more force coming back than we dealt. We underestimate our own impact on others. When we seek to “get even”, even though it seems “fair” to us, the other person will not feel the same.

Many of us are nodding in agreement and believe that we don’t seek to avenge ourselves. But how many of us have had the thought: Wow, that person is treating me really poorly.  I’m going to treat him the same way and see how he likes it.  Somehow we think we can teach other people a lesson by doing the very act we are trying to get them to avoid.  This rarely if ever works and instead often makes the other person feel hurt that we acted poorly toward them without realizing it’s the same thing they do (see the earlier post about hypocrisy).

Perhaps getting mad instead of even is actually the better response (and not getting mad probably the ideal response).  Instead of seeking retribution, we can explain the emotion to the other person and help them understand how it impacts you in a way that might get them to change. Getting even is just walking a relationally destructive path.

One thought on “Getting Even”