This is a continuation of a post I published a year ago called : Triathlons: A story in gradual change

After a restless nights sleep, I woke at 4:30 in the morning, ate a quick PB&J sandwich with a banana, and threw on some ridiculous looking compression shorts and a bike jersey. It was time to see if my goal from a year ago would come to pass, doing an olympic length triathlon. Because nothing says good morning like a 1500m swim in a lake, biking for more than 25 miles and then running 10km.  Earlier this year, I picked the Lake to Lake triathlon as one of the few triathlons near my hometown in Fort Collins of this distance, but it felt like a stretch because I couldn’t run more than 3 miles without significant knee pain.

At the end of last summer after completing another sprint triathlon, I discovered that I was able to run longer and longer distances leading to a goal of running a half marathon in the fall. Unfortunately, during a long training run in early October, after only 4 miles my knee suddenly hurt enough that I had to hobble the rest of the way back. Sometimes these pains just go away, but this one made clear that it was here to stay. Doing a little research, the symptoms matched “runners knee” which is when your knee cap does not track properly and rubs up against the grove.  The book that some one lent me assured me that this was 100% fixable, but the knee-joint is incredibly complicated and so it can be caused by many, many things. After two months of trying things on my own, I finally went to a physical therapist who identified an imbalance in how my muscles were working. She prescribed a few exercises to do twice daily — I asked how long it takes to fix this kind of thing and she said anywhere from a few weeks to 5 years.  Oh boy….

The pain subsided if I didn’t run, but the idea of not running anymore was not an option – it was so painful to even workup to running 5k that I didn’t want to give that up and I wanted to complete a longer triathlon. After a couple of months of the exercises, I could see some slow progress and I started to ramp my running again and was finally able to run 6 miles again with little pain, opening the door for competing in the Lake To Lake.

Normally you compete against people in your age group at a triathlon (40-44 males for example). These guys don’t just beat me, but usually are nearly complete while I’m still riding the bike.  This year though I discovered that they also have a Clydesdale class for all male athletes over 220lbs which I still easily qualify for. Since I weigh almost twice what the winners of my age group weigh, it’s nice to have some fairer competition.  Plus at the Lake-To-Lake triathlon, the previous year’s fastest Clydesdale finished in just over 3 hours and 15 minutes which was my target time (assuming things went well).

So at 5:15 in the morning, in a grassy field near Loveland High School,I set up my transition area.  Running Shoes, Bike Shoes, Wetsuit (the water was cold), Gloves, Helmet, water, and a bunch of other junk necessary to do all three activities.  Transition area set, I donned the wetsuit, wondering if once I zipped it up, people might confuse me for a beached whale. My wave left and after swimming nearly on top of one another, we swam around a couple of buoys as the sun was just rising. Normally, the transition area is near where you get out of the water but at this one, it was a quarter-mile away, so I got out and jogged incredibly ungracefully back to the transition area, think gorilla more than Clydesdale. I mounted my bike and started the journey up to Horsetooth reservoir.

Over an hour and a half later, I ran my bike back to the transition area, threw on my running shoes and started the final phase around the lake.  I felt tired, but not crushed.  I ran at a reasonable pace, keeping an eye on my heart rate to make sure I had enough to finish.  After 4 miles, I still felt pretty good so I turned up the gas and ran to the end, even sprinting at the finish line — 3 hours, 13 minutes from when I had jumped in the lake. Elated to be done, I stuck around to discover I had taken second among the nine horses who competed that day.

Over the year since my first triathlon and almost 18 months of doing an Ironman worth of activity each month, I’ve learned that our bodies respond to gradual change sometimes in ways that we don’t even notice.  In all three events, I’ve seen improvements but they come so slowly that sometimes it’s hard to even notice them except by looking back over a long time – and so I keep pushing.  I injured myself in part by trying to run too far, too fast without giving my body a chance to catch up and heal from the previous exertions. Often times slow change is the only way to conform or bodies to what they should be and after doing so the momentum carries us forward.

P.S. As a reward for this one and to celebrate 2 years of doing this, I signed up for a triathlon that is half an Ironman in September (or about double the distance of the Lake-To-Lake).  So the training continues, not as a chore, but as a hobby experimenting just what my body is capable of expect the 3rd part of this series then. 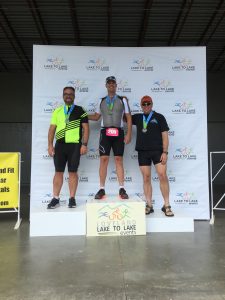 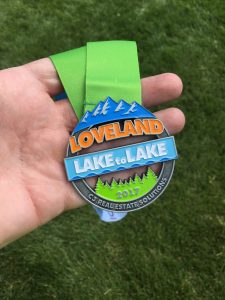